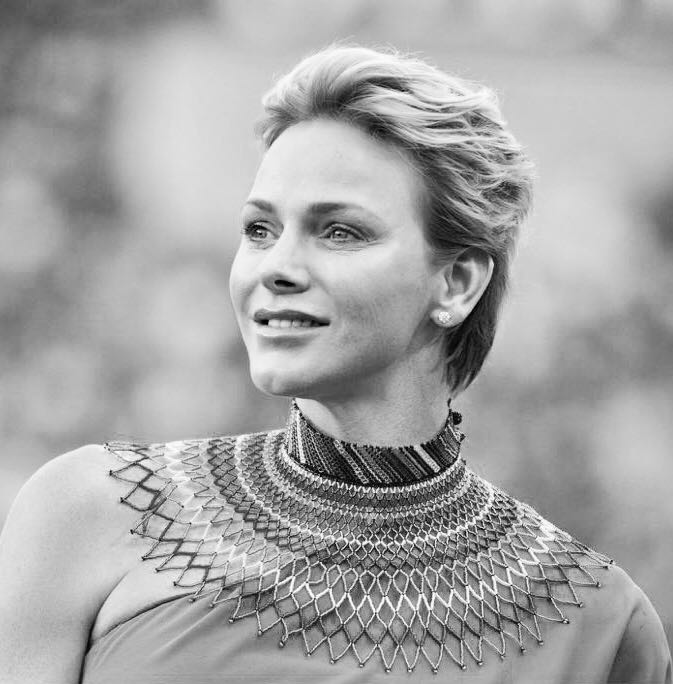 Charlene Lynette Wittstock was born on 25th January 1978 in Bulawayo, Zimbabwe, Africa.
When She was aged 12, her family emigrated to South Africa. At an early age she developed a passion for swimming and in 1996 at age 18 she won the South African Championship. In 2000 she won the gold medal for the 200m backstroke event at the “Marenostrum” international swimming meeting in Monoca. At this event She met Prince Albert for the first time as He was presiding over the international competition.

In 2002, She won three gold medals at the swimming World Cup (50m and 100m crawl, 4x100m relay) and the silver medal during the Manchester Commonwealth Games (4x100m medley relay).
In 2007, She ceased competing after qualifying for the Beijing Olympics.

Miss Wittstock was married to the Prince in a civil ceremony on 1 July 2011 in the Throne Room at the Palace of Monaco and the religious ceremony took place the next day in the Cour d’ Honneur of the Palace of Monaco presided over by His Excellency Bernard Barsi, Archbishop of Monaco.  She bears the title “H.S.H. Princess Charlene of Monaco” along with all the historical titles vested to the Prince, in the feminine. On 10 December 2014 Princess Charlene gave birth to twins, Crown Prince Jacques and Princess Gabriella.

“I salute Kevin Richardson and am honored to be the patron of his foundation. In an ideal world no wild animal would be kept in captivity and canned lion hunting should be declared illegal. I willingly lend my influence to rekindle respect for lions and the African wilderness, they so beautifully inhabit – in the hope that this is the ultimate guarantee of their survival.”
– HSH Princess Charlene of Monaco
Growing up in Africa heightened Her awareness of problems linked to childhood. Ms. Wittstock gave swimming lessons to underprivileged children throughout Her career. She has frequently accompanied His Serene Highness on his travels to support charitable works. Since 2009, She has been Honorary President of Ladies Lunch Monte-Carlo. Since 2010, She has been associated with the Nelson Mandela Foundation. She regularly participates in fund raising events for charities such as Amfar. On 27 of May 2011, H.S.H Princess Charlene was appointed as a Global Ambassador of Special Olympics. On 8 July 2011 Princess Charlene was appointed as a co-patron of the Giving Organisation Trust, a group of South African charities that deal with issues ranging from AIDS among underprivileged children to the protection of the environment. Since June 2012, Princess Charlene has been the patron of AS Rugby Monaco as well as Honorary President of Monaco Liver Disorder. Since November 2012, She has been Honorary President of the MONAA association. On 14 December 2012 Princess Charlene created Her own foundation dedicated to children. In 2014 She received the highest Italian honorific distinction and was awarded the “Knight Grand Cross of the Order of the Star of Italy”.

On 21 November 2015, Princess Charlene joined in partnership with the Pontifical Council and attended their 30th Annual Conference for Healthcare Workers at the Vatican where She spoke about the global drowning epidemic and about what Her Foundation is doing to help save lives from this scourge. In 2018 She agreed to be the patron of the Kevin Richardson Foundation after meeting Kevin and recognizing the work he does in bringing awareness to the plight of Africa’s most iconic animal.

Princess Charlene enjoys surfing as well as mountain hiking. Her choice of books includes reading biographies and ethnic South African poetry. Beyond her long list of charitable interests she also has a passion for contemporary art.