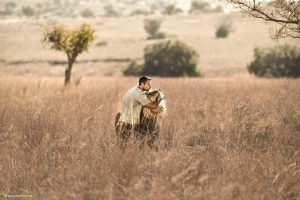 Kevin Richardson is a world-renowned wildlife conservationist and filmmaker, recognised by his persona as the ‘Lion Whisperer’. His mission is to highlight the status of Africa’s most iconic predator, the lion, through his work in the media and alongside fellow campaigners, researchers and scientists.

Kevin was born on the 8th October 1974 in Johannesburg, South Africa. He spent his childhood in the suburb of Orange Grove, far from the African bushveld he would grow to love.  At around the age of four, his love of animals manifested itself with the rescue of a baby bird he helped raise with his father. He soon became known locally as ‘The Bird Man of Orange Grove’ and began to take in many more waifs and strays.

As Kevin grew up, he planned to follow a career with animals and set his sights on veterinary science. However during his teens his focus was far from his studies and the young rebel was not accepted onto the course. He shifted his focus to zoology, before finally completing his BSc majoring in anatomy and physiology.

In 1998 he was given the chance to work with two lion cubs, “Tau” and “Napoleon”, at a local lion park.  Here he honed his abilities and unique skills to work with lions in a hands-on, interactive manner challenging many misconceptions, and was soon dubbed ‘The Lion Whisperer’ due to his extraordinary personal relationships with these lions.

Although he started his career at a lion park that allowed cub-petting for tourists, he began to understand the pitfalls of this industry, and never felt comfortable with the answers he had been given as to what ultimately happened to the lion cubs once they grew up. Like many of these parks in South Africa, once cubs grow too big to pet, most potentially end up supplying the controversial ‘canned lion hunting’ industry.

Towards the end of 2011 Kevin severed all ties with his partner and moved all of the animals in his care to a new facility on the south east boundary of the newly formed Dinokeng Big 5 Game Reserve in Pretoria, South Africa. Here he implements a no-breeding policy of lion cubs and has aligned his fight against ‘canned lion hunting’ with the Campaign Against Canned Hunting (CACH) and various other organisations.

His television work has been screened across multiple platforms worldwide.  More recent examples include ‘The Lion Whisperer’ (France 2 – one of the channels most highly-rated natural history shows); ‘The Lion Ranger’ series for National Geographic Wild; ‘Lions on The Move’ (multiple channels); ‘Lions, The New Endangered Species’ (GoPro – over 37 million views);  ‘Lion Whisperer’ (60 minutes USA – CBS –  highest rating in two years with over 18.5 million Americans watching) highlighting the plight of dwindling wild lion populations and the horrors associated with cub-petting and the ‘canned lion hunting’ industry. In June 2014 he launched his own YouTube channel: Lion Whisperer TV, introducing the world to his lions and work on a daily basis which has garnered over 1,720,000 subscribers and continues to reach new audiences.

In March 2015 ‘Killer IQ: Lion v Hyenas’, featuring Kevin and his animals, premiered on the Smithsonian Channel and featured in the channel’s respected magazine plus other channels globally.  Working with the world’s leading experts, this ground-breaking two-part series explored the cognitive behaviour of lions and hyenas. Kevin also provided unlimited access to the sanctuary for Natalia Borrego (one of the experts in the series), to complete her PhD in lion cognition.

Kevin has taken part in many speaking events on lions and lion conservation and was a guest speaker at Google Zeitgeist, alongside influential speakers including former US presidents Jimmy Carter and Bill Clinton, and the esteemed scientist Dr Craig Venter who is responsible for DNA sequencing the human genome. His association with the Australian non-profit organisation Painted Dog Conservation Inc. (PDC Inc) helped to raise over AUD$100 000  at three separate speaking events in Perth, Melbourne and Sydney in 2013, 2015 and 2017.

Collaborations with world-recognised artists and photographers help to raise awareness and funds for conservation. Fine art photographer David Yarrow has donated a percentage of his print sales of Kevin’s animals to TUSK, Britain’s leading African Wildlife Charity which features HRH the Prince William as its patron.

Starting this foundation has been in Kevin’s heart since 2011 and finally he is positioned to embark on the wider conservation work he truly cares about. Along with the launch of his foundation in 2018, Kevin’s conservation efforts include the successful release of captive-born spotted hyena into the Dinokeng Big 5 Game Reserve in February 2018.