Collaring – The how’s and why’s

Collaring lions is most definitely a crucial part to the conservation of lions – but not many of us are aware of the vital role it plays. Foundation Director Caroline went along on a lion collaring trip, and this is a piece she wrote on the experience. 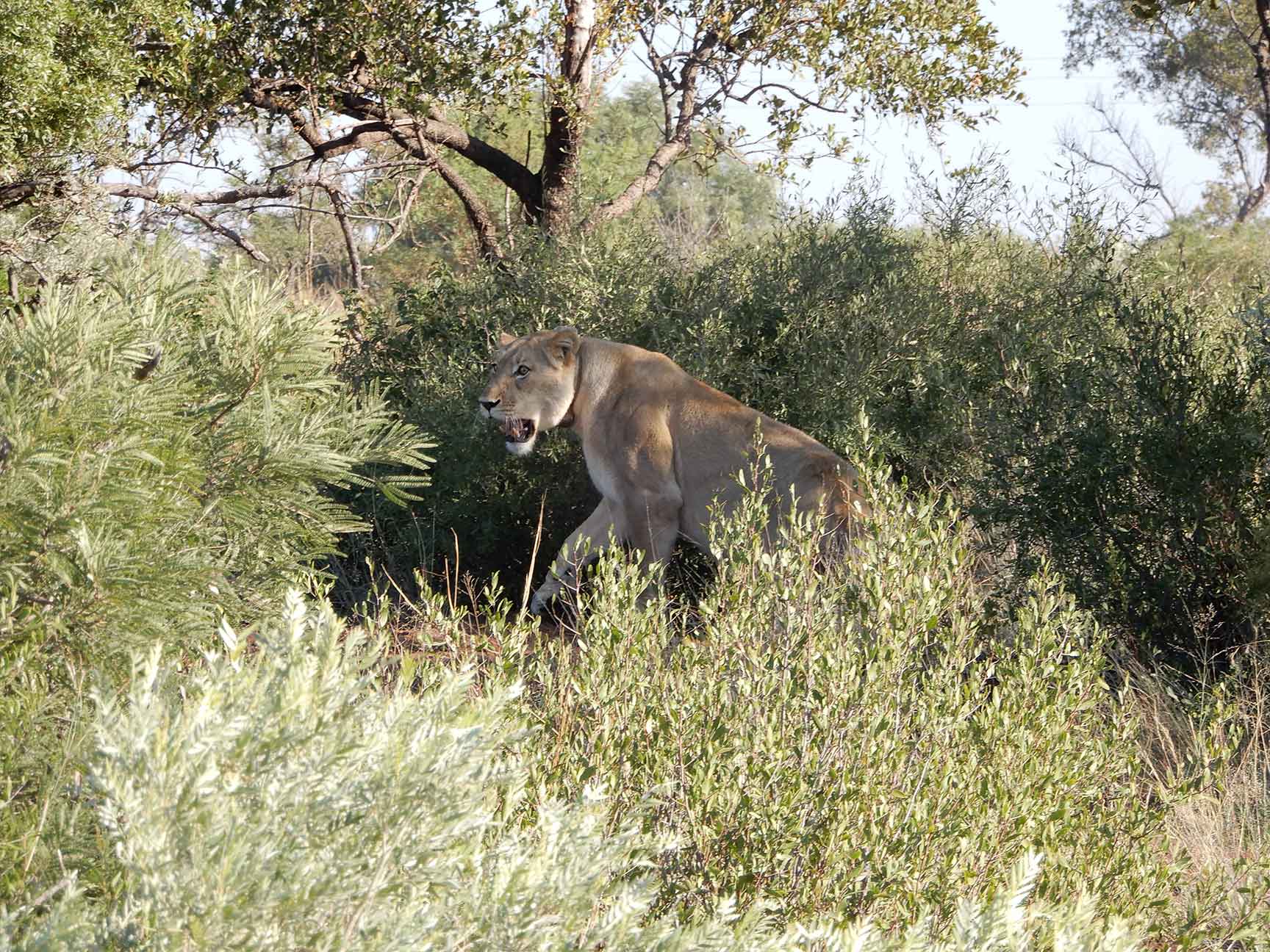 The Kevin Richardson Foundation is situated in Dinokeng, the only Big 5 game reserve in South Africa that is situated next to a metropolitan area. It is located within Gauteng – SA’s most densely populated province. Looking after a Big 5 game reserve is no easy job, and there are a number of problems and responsibilities that come with the territory. Managing the various lion prides is one of these tasks. Although the lions are wild, they are ultimately restricted by fences and are not free to roam outside the confines of the reserve. One of the problems this causes is the possibility of in-breeding – father with daughter, brother with sister, etc. – as young males have a limited area to move to if ousted from the pride. Not to mention, every reserve has a limited carrying capacity and so numbers have to be maintained. For this reason, some lionesses are given contraceptive implants. Many of you who have been lucky enough to visit a South African reserve will have noticed that some of the animals wear collars.

There are various reasons for this, such as knowing the whereabouts of an animal to be sure it hasn’t escaped or is approaching human settlements, or generally being able to make note of its movements. If for example, a signal from a collar has not moved for some days, the animal might be injured or even snared. The rangers can then pick up on the lack of movement and check on the animal. Collars and batteries will last about three years and cost about $3000 – a large expense in South Africa.

I was lucky enough to go with the Dinokeng rangers and vet to replace a collar and do implants on two lionesses from the South Eastern pride. Once the animals have been located, they have to be darted. Sometimes rangers in vehicles manage to locate them but other times a helicopter has to be called in to help if the bush is particularly dense. The helicopter is also able to monitor other pride members and keep them away. These two girls, 13 and 10 years old, were near a road. One lioness, in particular, was very strong and gave the helicopter the run around even after being darted. Once asleep, they were carried to an open spot and work began. The new collar was VHF and satellite; the satellite part was housed in the smaller box on the top of the collar and the VHF and batteries were housed in the heavier, larger, lower box. 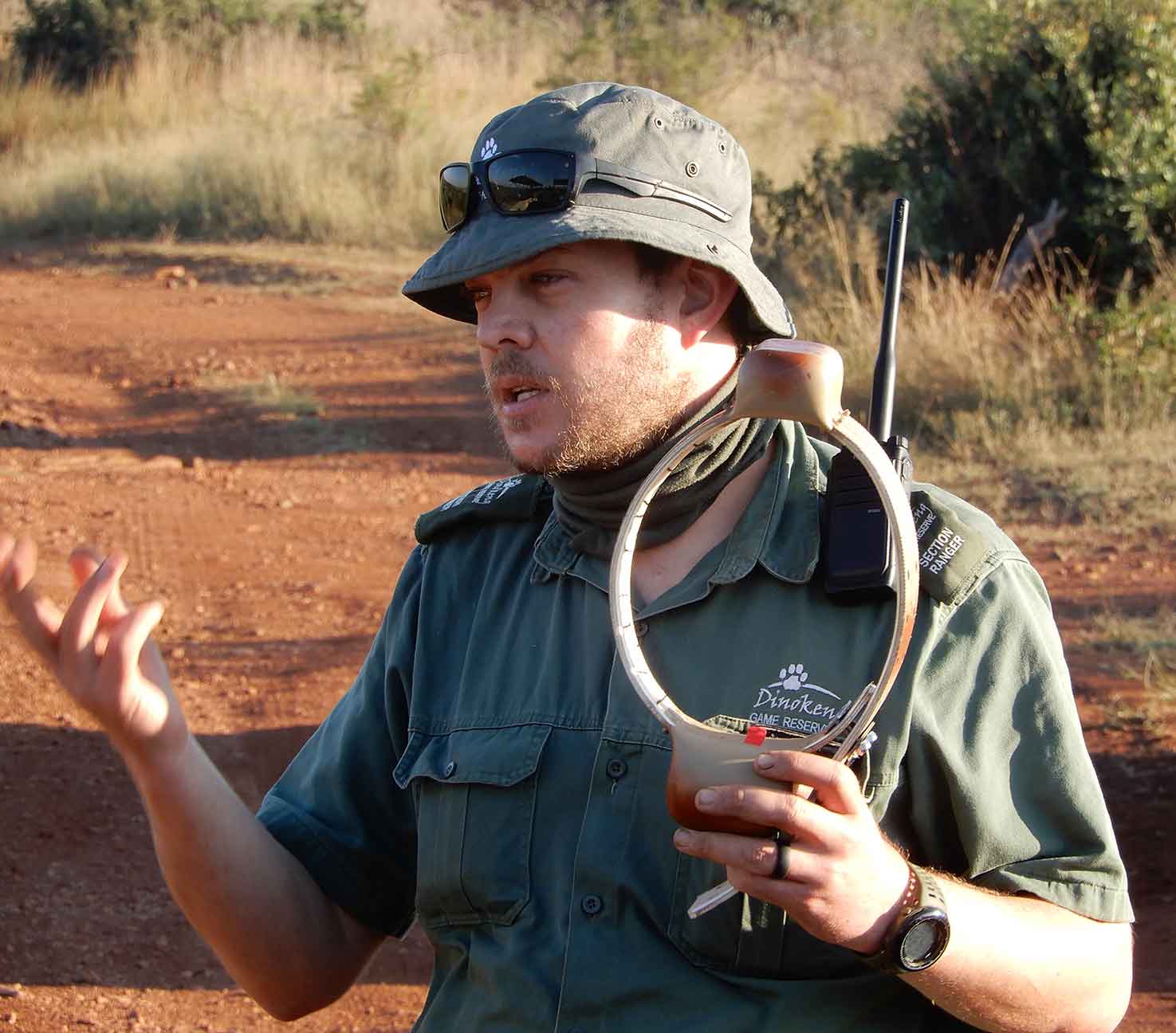 The collar is made of hard-wearing dental acrylic. A lion collar weighs about 2kg, whereas an elephant collar weighs about 6kg. Animals quickly get used to wearing collars and this lioness has worn one for years and so would not even notice she had a new one. However, fitting it is very important; not tight enough to choke but not loose enough to slip off. You can see from the photo the new collar being compared to the old one to get the right size. 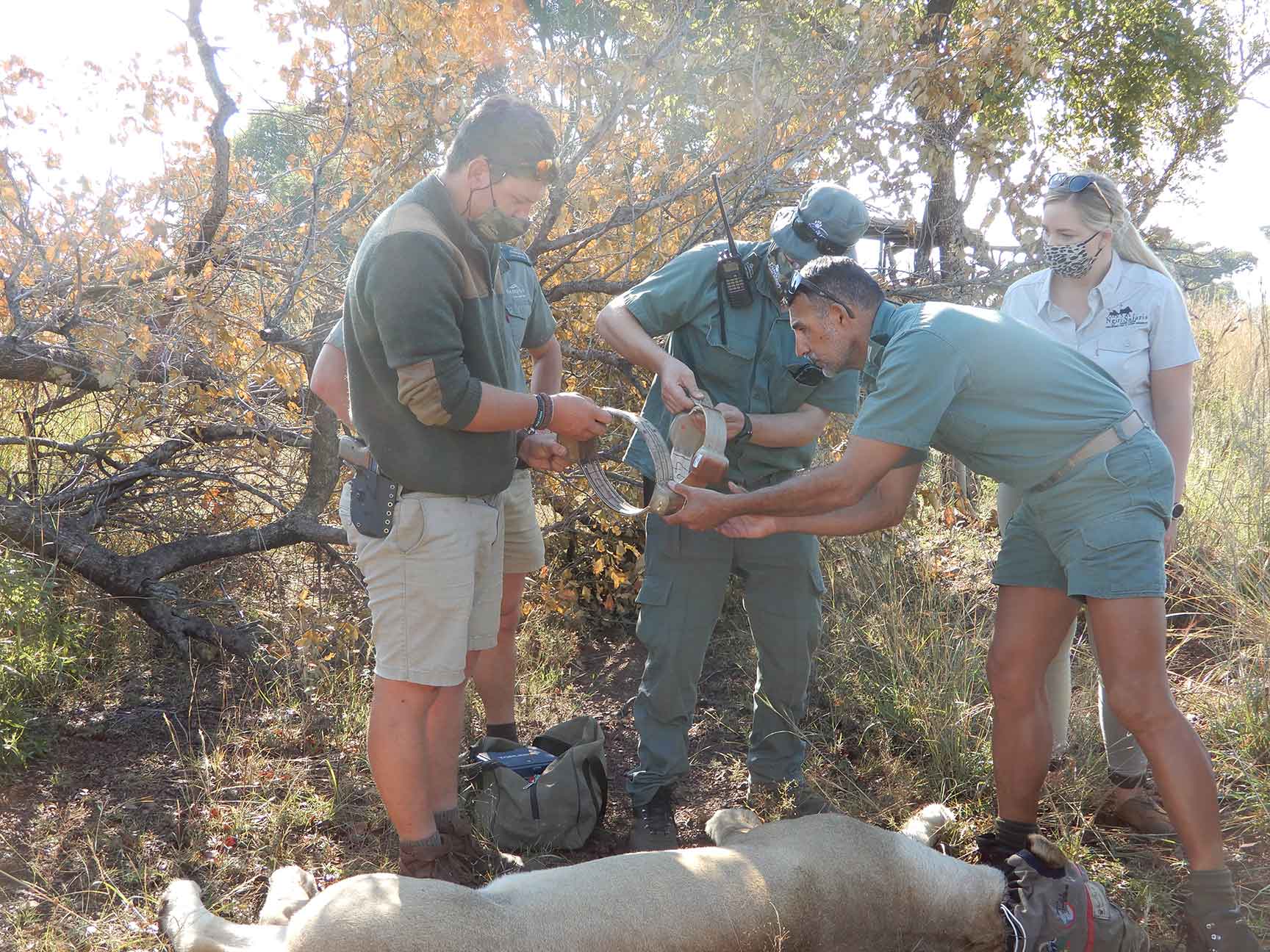 Whilst the collar is being fitted, the vet does the contraceptive implants, takes blood samples, checks the lioness over for wounds, ticks, etc. The lionesses were asleep for roughly 45 minutes, oblivious to all the activity around them. The vet then administered the wake-up jab and within 15 minutes the girls were looking around for a nice shady spot to sleep it all off. 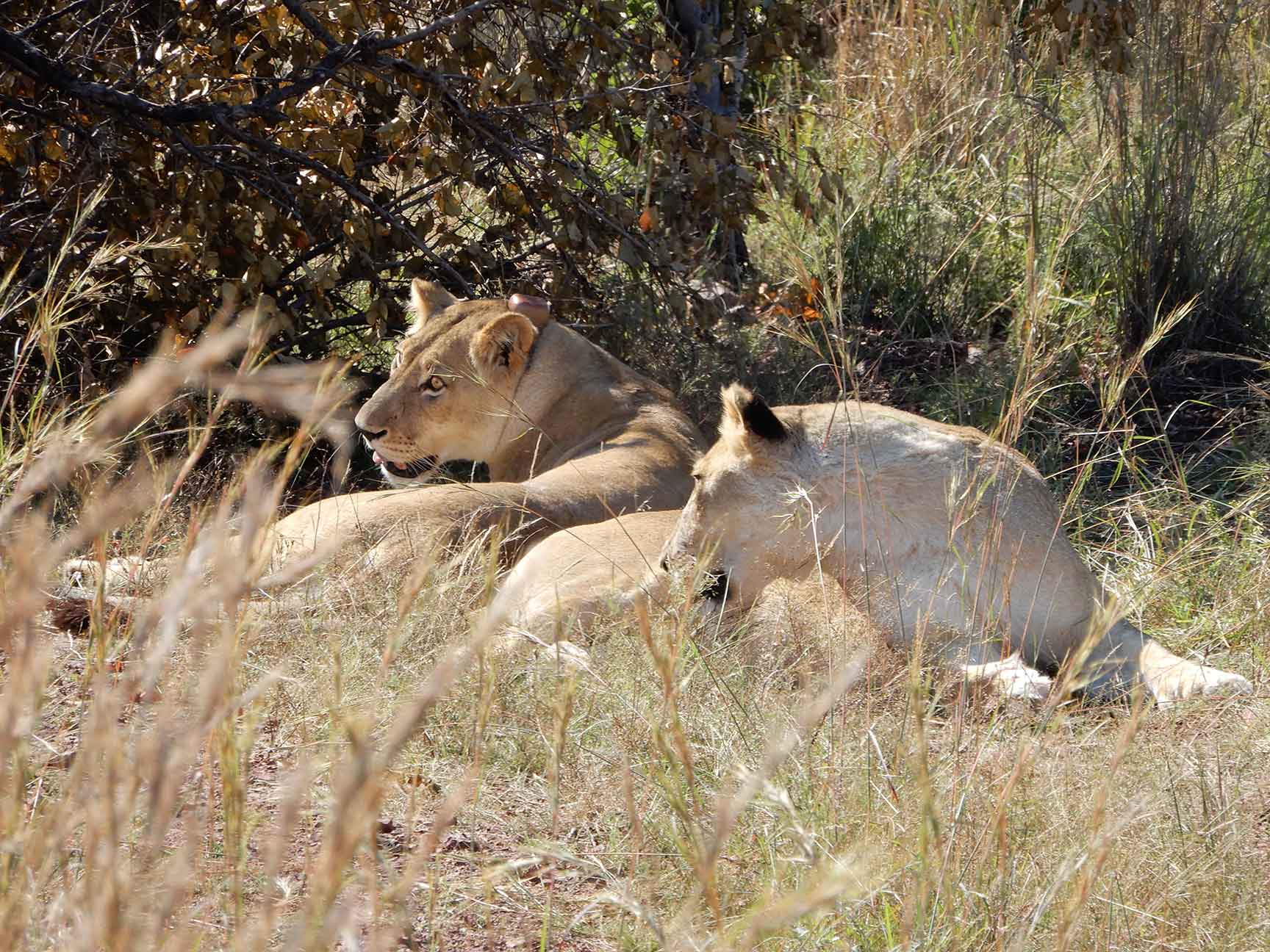