Thinkpiece
Imagine it is the year 2000. The world is celebrating a new millennium.

We have survived the hysteria of Y2K; another “end of humanity” conspiracy passes us by … Phew.

Book, newspaper and magazine covers from the late 1990s
Reality TV has just hit screens. Big Brother has the world glued to a new addiction – watching the details and drama of the daily lives of other people. We’re no longer fighting over the family landline telephone – cell phones are becoming widespread and aren’t the bricks they used to be; they fit in your pocket now! PlayStation 2 is released; gaming is on the rise. Napster is about to hit, making digital music widely available for free. The iPod is released; goodbye to the trusty Discman. A historical broadcast record is set when 3,7 billion individuals tune into the Summer Olympics in Sydney.

It feels like the world has burst open in a limitless realm of possibility. We are a world connected. Information pours in; bucket lists extend. The planet has never been smaller; our options have never been wider.

With this sense of limitless possibilities, let’s look at a few key world trends that unfold.

Over the following 20 years:

– International leisure travel doubles
– Life expectancy increases by a whopping 5,2 years
– Humans lose around four to five hours of available time in the day to social media and digital entertainment
– Obesity rates double
– Depression and anxiety skyrocket, affecting one in 10 adults globally and resulting in one million deaths by suicide every year
– 19 of the 20 warmest years will occur on earth (with the exception of 1998)

Over 40 years, wild populations of mammals, birds, amphibians, reptiles and fish shrinks by 68%.

What the bleep happened to us?

How can so much happen so quickly? We are living longer, but we are sadder and more anxious. We have made amazing advances in medicine, but we are chronically unhealthier. Technological advances have created a culture of convenience, but we have less time in the day to perform normal social activities. What the bleep happened? And what lies ahead in the next 20 years? 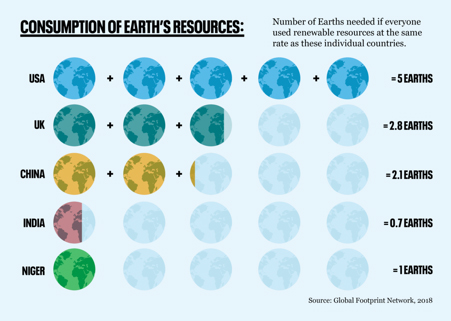 Are there too many of us?

It is easy to point the environmental disaster finger at the burgeoning populations in the world’s poorest countries. “There are too many people and not enough space” we say. But should we attribute the bleak ecological situation solely to the expansion of agricultural activity into rainforests, the bush meat trade and the increasing pressure on land to make way for more people to live? Yes, all these issues are of great concern but, as mentioned in a previous newsletter (hyperlink to “At war with everyone”), the environmental impact of richer nations far outweighs that of poor nations. Today, a child born in the US will produce 160 times more carbon emissions than one born in Niger, Africa (source, Population Matters).

There has been a lot of “population panic” recently in public discourse and social media. We have to be weary of oversimplifying these overwhelming issues. As Kevin often says, “the devil is in the nuance”. Small adjustments can have major implications. For example, across the board, research shows that the higher the level of a woman’s education, the fewer children she is likely to bear. That means that if the environmental crisis is a population problem, and the population problem is a female empowerment problem, then the environmental problem is a female empowerment problem. De-worming a student in Africa decreases absenteeism in schools by an incredible 25% [Source: Poverty Action Lab]. Even more fascinating, a Harvard University study in Tanzania showed that female students given capsules of iodized oil (salt), did better in school and were less likely to be held back an entire grade. Each year a girl stays in school reduces the number of children she is likely to have.

If you follow this trail and traverse across the vast spaces from population issues, to habitat issues, to women’s education, to absenteeism in schools, to salt in schoolchildren’s diets, you realise we have gone down the proverbial wormhole. What we believe to be solutions to the world’s problems may be lightyears away from more effective ways of combatting climate change.

A lot of answers can be found in the nuanced wormhole of a problem.

Where to from the nuanced wormhole?

The problem with nuance is it can be boring, and it’s never simple. It feels much better to know what and who to blame for the woes of the last two decades, than to sift through the mire of complex factors that has brought us to this place.

With the 2020 unfolding drama of the Covid-19 pandemic and the world’s eyeballs glued to the US Presidential elections, it seems, now more than ever, that there is a screaming match between oversimplified and polarised perspectives. The left versus the right, the Corona cautionaries versus the denialists. We’re slinging names at each other like “radical socialists”, “sheeple” and “snowflakes”. It’s US versus THEM. More than ever, we are anxious, we are divided… we are desperately seeking a simple explanation.

At the Foundation we often feel overwhelmed by the crises facing our natural world. We love lions and want them to exist. We wish we had a simple answer and that we could blame one single enemy, and this is tempting. But we firmly believe the nuance

a wormhole is a journey that must be undertaken to make strides in preserving natural habitats and wildlife. We can’t love wildlife but ignore human issues. We can’t pin the blame solely on the hunter or poacher. We can’t rescue and home all the lions in captivity. We know we don’t have the answers, but we do know we need to view this world as the sum of all its complex parts.

Which side are we on?

This article has been a bit of a wormhole itself, and if you are reading this far down, we want to thank you for going down the wormhole with us. In conclusion, we want our supporters to understand that we don’t want to choose one side or the other. We don’t want to let politics and opinions blind us to viable solutions that may help the overall cause of lions. We often talk about how everything in nature is interconnected. We believe that humans are interconnected as well. We see the separation of humans from nature, and humans from each other, as probably one of the greatest afflictions of our time.

The last 20 years have seen radical change. This change has connected us through travel and technology, but has also radically distanced us on economic, social and moral issues. We don’t think people need to share the same positions politically to agree that our earth is in peril, that we need to do something to stop it.

Our consumer decisions matter. What we say to each other online matters. Being kind to each other matters. Cooperation and empathy matters. How we vote matters. Reflecting on the last 20 years and having hope for the future matters. In the next few months we are going to be launching a campaign wherein we ask you to do something that matters. We hope you watch this space and join us.

← The dogs that live next door to lions How to feed two birds with one seed. →